Leaving on a Jet Plane

My bags are officially 100% packed and much heavier than last time, which must mean that I’m bringing home some cool stuff 🙂 off to the airport We go! Thank you to everyone who has made my AliciaGoesAussie adventure better than I could have ever, ever imagined. I am so lucky!!

Last This, Last That

“When one door of happiness closes, another opens; but often we look so long at the closed door that we do not see the one which has been opened for us.” -Helen Keller

Everything in AUS is coming to a quick, screeching halt. We blinked twice and the past five months passed before our eyes. However, it has been such an amazing trip and I have become a much better, more worldly, and more well rounded person because of this experience, and I am so thankful for the opportunity.  I have improved my water polo skills and coaching techniques, along with discovering a love for “everyday writing” and blogging, making “mates for life,” and having a blast. 🙂

Yesterday, the three of us drove out to the airport to meet Nicole’s college coach, Barry, who was flying from the US to Perth to watch and recruit at the Junior World Champs. It was so great to see him and to learn that he remains very up to date on our AUS activities through reading my blog. (Hi Barry! 🙂 ) Also, I received UCD swim caps in the mail from Kandance! I can’t wait to give them to all of my players. As she said in her note with the caps, my 16s and 18s players will truly be swaggied out. 😉 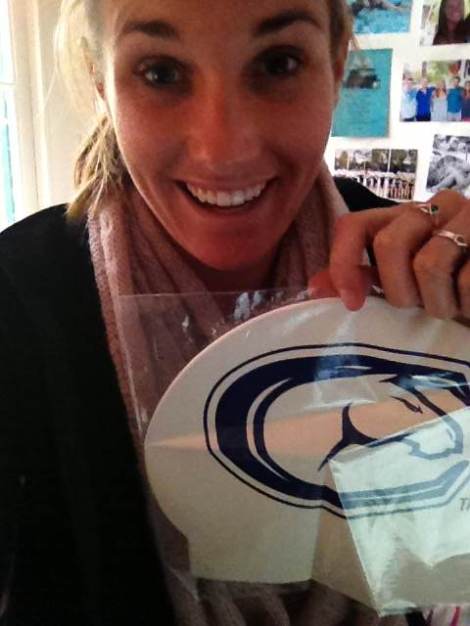 Today was my last AUS lunch with Perry and Steve. We had a great season debriefing and I ate a delicious bacon, egg, lettuce, tomato, and avocado sandwich. Yum. It’s so awesome to see how far the MC women’s program has come over the past few years, and to know that I am a large part of it. The Summer 2010 season, MC had a 16s, 18s, and SL2 team. Last year, they were able to create a SL1 team with the help of the first round of American girls. This year, we had four teams, 16s, 18s, SL2, and SL1, all four team teams made it to finals, three teams played in Grand Finals, and 16s won. That is amazing, if you ask me! I am excited to say that Steve invited us back to play for MC and hopefully National League next year! It will be fun to see what 2013 brings and to explore the option of returning to good ol’ Kingsley Street.

Tonight, we are going over to Alli’s house for a Christmas dinner! I am so excited, but sad at the same time, because it will be the last time that I see her for a while. However, that is how all goodbyes are. It is cliche, but I like to think that it is not a goodbye, but a see you later, because I really will see everyone later. It will be fun to show everyone around CA at some point or another and to come back to Melbourne to visit in the future.

As for now, the three of us are off to sit down for coffee at Jimmi Jamz, our favorite (and cheapest) coffee shop with the most delicious muffins! 🙂 I am enjoying every second that I have left!!

Alicia’s Aussie Phrase of the Day: fair enough. Meaning that the topic of conversation makes sense and is neither a huge positive or negative. Usage:

Alicia: “On my return flight, I will have to pay for 2 overweight bags, but it is cheaper than paying for a third bag”

Tomorrow marks the finals of VIC Polo Summer Comp. Out of the 9 of the 11 divisions will feature MC teams. Go Team!! 🙂

Daniel texted me the day after Thanksgiving to say that he was still completely full. He now understands the full meaning of a Thanksgiving Hangover, where someone is not at all hungry the day following Thanksgiving. 🙂 However, Nicole and I didn’t seem to experience such issues this year. Instead, we went for a long walk to Balaclava and Chapel Street. It was a gorgeous day outside, and we just cruised around going from store to store window shopping. I even found a cafe called Ziggy’s! 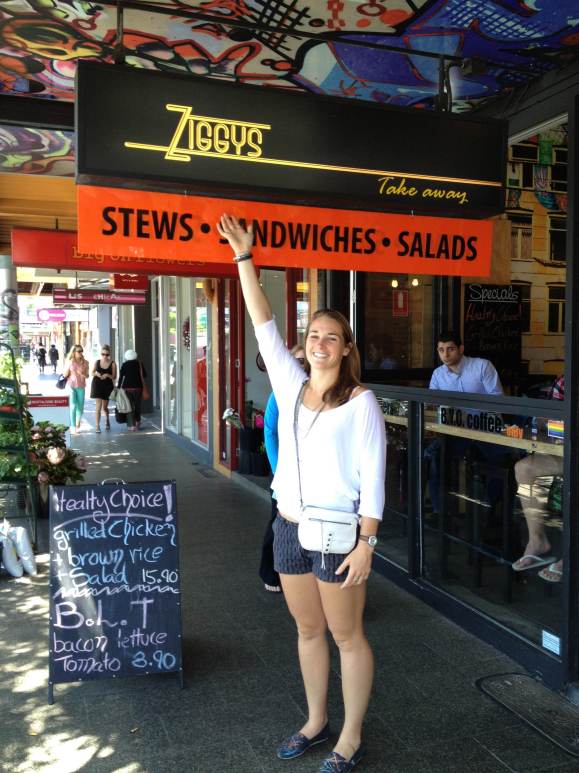 Along the way, we beat our Thanksgiving Hangover and tried out the new Ben and Jerry’s. I got mint chocolate chunk, of course, and chunky monkey in honor of my dad. 🙂 It was delicious!

The rest of the weekend has been quite good. Saturday was the first round of playoff games for water polo and 15 of the 16 Melbourne Collegians teams played throughout the various leagues. Pretty good if you ask me! 🙂 Our 16s team had an unfortunate loss, but the way that the fixtures work, the top seed plays the 2nd and the 3rd plays the 4th, then the winner of 1v2 goes straight to the grand final and the winner of 3v4 plays the loser of 1v2 on another day and that winner plays in the grand final. (I hope that makes some sense!… 1v2&3v4, L(1v2)vW(3v4) plays then the winner of that plays W(1v2). haha complicated!) Thus, our 16s team will play again on Tuesday for a second chance at a grand final slot. It is a game that we should win. Our 18s team gave Melbourne Uni their first defeat of the season with a definitive 7-0 win! Our SL1 team played Richmond and won 15-8 (or something like that). It was a good win! I was majored in the third quarter, but before that, I made a few goals. Everyone played awesome! Now 18s and SL1 play Thursday in respective grand final matches!

On Sunday, I worked a ton, but now I at least have some extra padding in my wallet for my last handful of Australian days. 🙂 At training, one of the guys rocked up with a Joe Jost’s tshirt on, which is my Dad’s favorite bar in Long Beach. It just so happened that as I was running late to training, I grabbed my Joe Jost’s tshirt to wear because I could not find a UCDWWP shirt in my rush. It was fate! Of course, We snapped a photo! 🙂 I was thrilled.

Alicia’s Aussie Picture of the Day:

Each Wednesday, I bike around 12k down to Sandringham for work with RSG. On the way, I pass this statue, and I have always admired it. Finally last week, I stopped to take a picture. I really like it! 🙂

Like I said the other night, our Thanksgiving was one for the books! And now, I have my first “Thanksgiving List” to create Thanksgiving binder, just like the one that my mom’s binder.  You should see it! Every dinner that they have prepared has a sheet that includes details of what was served, how heavy the turkey was, how many people attended, what time dinner was served, and so much more. Additionally, all of the needed recipes are included behind those sheets. Check out my first one!: 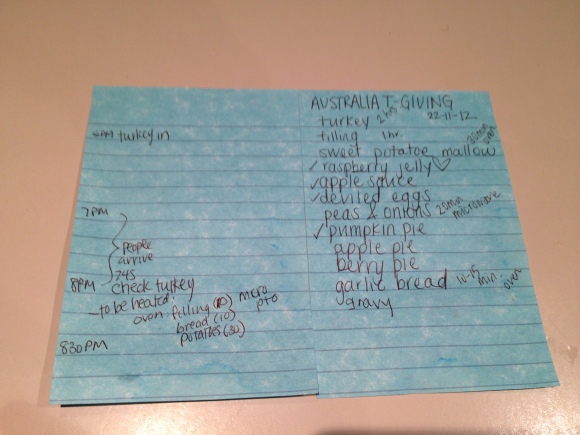 My Thanksgiving day was a lot different than usual. It began with morning practice (5:30AM) and our usual Thursday morning brekky. The three of us and Alli went to Chez Dre, an adorable french restaurant in St. Kilda. We all got french toast and it was absolutely delicious. Then, due to a suggestion by several teammates of where to find pumpkin pie, we took two trams to reach Costco. There, we were able to snag the last authentic, American Thanksgiving pumpkin pie for only $8. We also bought whipped cream, which was almost as much as the pie, but totally worth it!

Once we got home, Nicole and I stated the food preparations while Chelsea made a last minute run to Coles. Our dinner was complete with turkey, Chelsea’s family recipe of potato filling (a cross of stuffing and mashed potatoes), sweet potato mallow, Grandma Thomas’ apple sauce, peas and onions, and deviled eggs. I took tons of photos to remember our epic cooking experience and share with everyone!

Aussie eggs are all brown and they make delicious deviled eggs!

Our frozen turkey, which turned out to be delicious 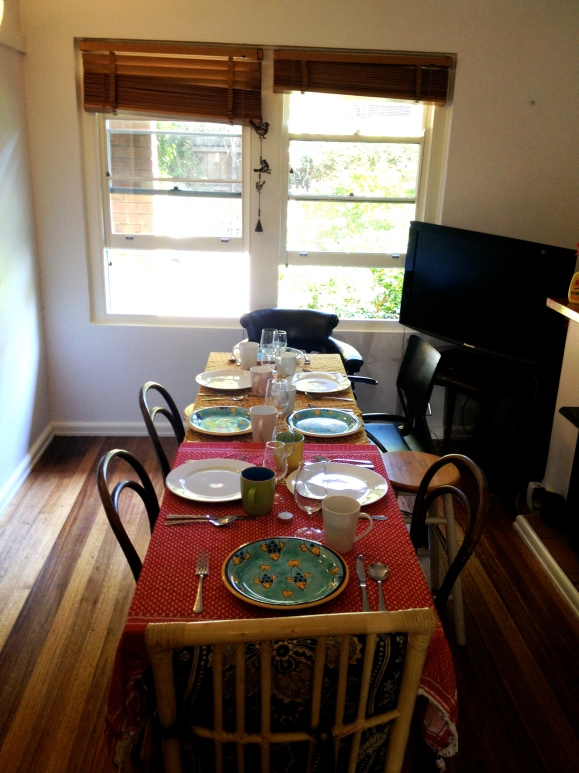 We completely rearranged our living room in order to host our guests! 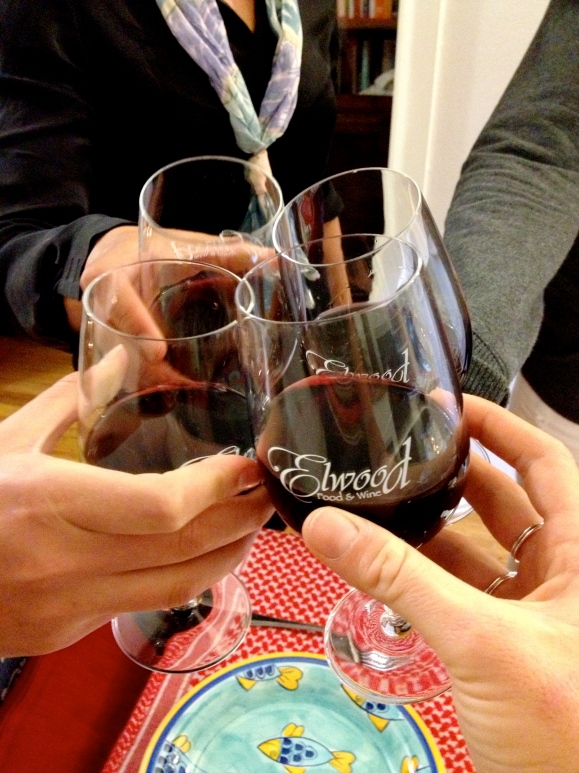 Looks like a pretty typical Thanksgiving plate to me 🙂

It was a fantastic way to celebrate the holiday with my home away from home. On Friday, I was lucky enough to video chat the entire family while they were eating Thanksgiving dinner at our house! I took a screen shot! 🙂

Alicia’s Aussie Word of the Day: mate. Meaning friend, or more generally a person. Usage: I called up my girl mates to go out to dinner.