Daniel texted me the day after Thanksgiving to say that he was still completely full. He now understands the full meaning of a Thanksgiving Hangover, where someone is not at all hungry the day following Thanksgiving. 🙂 However, Nicole and I didn’t seem to experience such issues this year. Instead, we went for a long walk to Balaclava and Chapel Street. It was a gorgeous day outside, and we just cruised around going from store to store window shopping. I even found a cafe called Ziggy’s!

Along the way, we beat our Thanksgiving Hangover and tried out the new Ben and Jerry’s. I got mint chocolate chunk, of course, and chunky monkey in honor of my dad. 🙂 It was delicious! 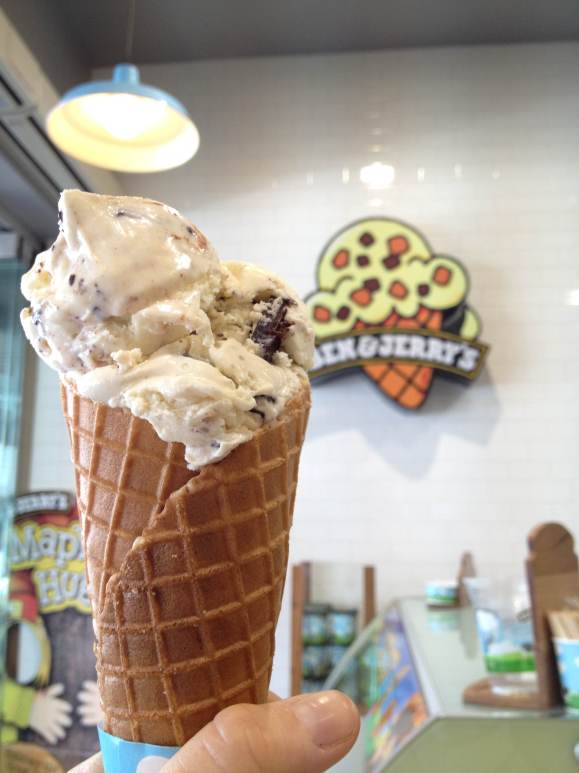 The rest of the weekend has been quite good. Saturday was the first round of playoff games for water polo and 15 of the 16 Melbourne Collegians teams played throughout the various leagues. Pretty good if you ask me! 🙂 Our 16s team had an unfortunate loss, but the way that the fixtures work, the top seed plays the 2nd and the 3rd plays the 4th, then the winner of 1v2 goes straight to the grand final and the winner of 3v4 plays the loser of 1v2 on another day and that winner plays in the grand final. (I hope that makes some sense!… 1v2&3v4, L(1v2)vW(3v4) plays then the winner of that plays W(1v2). haha complicated!) Thus, our 16s team will play again on Tuesday for a second chance at a grand final slot. It is a game that we should win. Our 18s team gave Melbourne Uni their first defeat of the season with a definitive 7-0 win! Our SL1 team played Richmond and won 15-8 (or something like that). It was a good win! I was majored in the third quarter, but before that, I made a few goals. Everyone played awesome! Now 18s and SL1 play Thursday in respective grand final matches!

On Sunday, I worked a ton, but now I at least have some extra padding in my wallet for my last handful of Australian days. 🙂 At training, one of the guys rocked up with a Joe Jost’s tshirt on, which is my Dad’s favorite bar in Long Beach. It just so happened that as I was running late to training, I grabbed my Joe Jost’s tshirt to wear because I could not find a UCDWWP shirt in my rush. It was fate! Of course, We snapped a photo! 🙂 I was thrilled.

Alicia’s Aussie Picture of the Day:

Each Wednesday, I bike around 12k down to Sandringham for work with RSG. On the way, I pass this statue, and I have always admired it. Finally last week, I stopped to take a picture. I really like it! 🙂

One thought on “Turkey Hangover”