When I GoogleMap search a place, I typically expect the closest location to be highlighted. Then, I can create directions and easily arrive at my destination.

So today, the three of us went to do Pilates with Chelsea’s coworkers in Princes Park (pronounced “princess”). So, we GoogleMapped the location, used metlinkmelbourne.com.au to find public transportation directions, and off we went. An hour later, we arrived in Princes Park on the other side of downtown Melbourne. It was a nice park with a tennis court, footy oval, and playground. However, I had to ask the question, “do your coworkers live all the way out here and drive into work everyday?” Chelsea didn’t know the answer.

After waiting at the park for about ten minutes, Chelsea called her friend to find out which “park by the tennis courts” they were at, and her friend mentioned Hawthorn Road. There was no Hawthorn Road anywhere near our location. 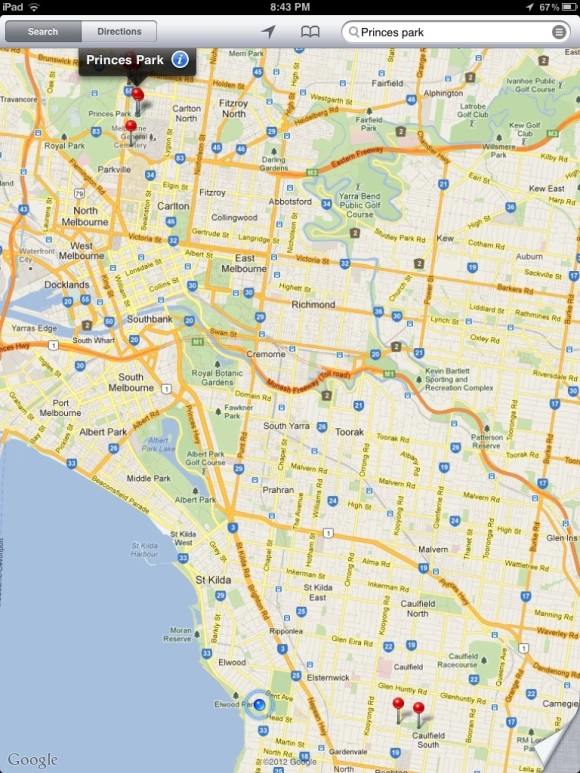 Our house is the blue dot on the map, and the park that we went to is the red pin on the top left. The park that we were supposed to be at, also named Princes Park, is on the bottom right of the map, very close to our house. Oops! However, like Ben and my public transport debacle in the rain, it was a silly journey to remember! Next time, we will definitely double check GoogleMaps!

Alicia’s Aussie Word of the Day: bogan. Meaning someone from the country, like red necks in the US. (However it is not always a nice term.) Usage: it is twice as hard for me to understand the Aussie accent of a bogan than of someone from Melbourne city.